This is a 'major' demonstration?

March 28, 2010
Various bloggers and online news sites have made reference today to the 'wave of rage and indignation' that is prompting spontaneous 'demonstrations' demonizing the Church. Here's a photo of the 'mob' that gathered in front of Westminster Cathedral in London that appears in the This Is Lancashire. 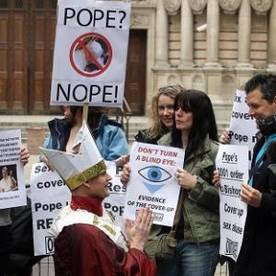 One hopes that citizens were able to navigate their way through the gridlocked traffic caused by such a MASSIVE demonstration.

So the biggest crowd that a professional campaign could put together to tap into the overwhelming rage among the millions who are turning against the church (according to the article) hardly filled a frame of a close camera shot.  Hooey! the church must be trembling in its boots through the world if this is the best the anti-church forces can do.

This small and pathetic display was enough to garner world wide attention with uncritical news reporting which is building to a common consensus that the who church is evil. Evil's purpose is done. Another weight has been placed upon the church to bear in this lenten Passion. Just as a splinter group of unfaithful religious undercut the opportunity for having all the benefits of Obamacare - while still maintaining an official government prohibition for the use of Federal tax dollars being used for elective abortions. All it takes is one point of weakness, shrouding itself as false compassion and the Culture of Death lashes the Body of Christ anew.

Pray for the Church. Accept to do penance for its sins in remittance for its crimes. And yes, suffer with the Church as well. But please God, endure we will and truth will win out in the end.

Maybe Chris de Burgh was on to something in his classic... Spanish Train.

May 03, 2010
The May 2010 Euthanasia Prevention Coalition Newsletter can now be found at: http://www.euthanasiaprevention.on.ca/Newsletters/Newsletter108(May2010)(RGB).pdf Bill C-384 was soundly defeated by a vote of 228 to 59. Check how the Members of Parliament voted at: http://www.euthanasiaprevention.on.ca/HowTheyVoted.pdf On June 5, 2010, we are co-hosting the US/Canda Push-Back Seminar at the Radisson Gateway Hotel at the Seattle/Tacoma Airport. The overwhelming defeat of Bill C-384 proved that we can Push-Back the euthanasia lobby in the US and Canada and convince people that euthanasia and assisted suicide are a dangerous public policy. Register for the Seminar at: http://www.euthanasiaprevention.on.ca/2010SeminarFlyer(RGB)(LetterFormat).pdf The Schindler family are being attacked by a Florida television station and Michael Schiavo. The Euthanasia Prevention Coalition is standing in solidarity with the Schindler family. My blog comments: http://alexschadenberg.blogspot.com/2010/05/att
17 comments
Read more
June 19, 2010
2 comments
Read more