February 22, 2010
A WOMAN was flying from  Melbourne to Brisbane.  Unexpectedly, the plane was diverted to Sydney.  Along the way  the flight attendant explained that  there would be a delay, and if the passengers wanted  to get off the aircraft, the plane would re-board in 50 minutes.

Everybody got off the plane except one lady who was blind. The man had noticed her as he walked by and could tell the lady was blind because her guide dog lay quietly underneath the seats in front of her throughout the entire flight.

He could also tell she had flown this very flight before because the pilot approached her, and calling her by name, said, 'Kathy, we are in  Sydney for almost an hour. Would you like to get off and stretch your legs?'

The blind lady replied, 'No thanks, but maybe Buddy would like to stretch his legs.'

Picture this: All the people in the gate area came to a complete standstill when they looked up and saw the pilot walk off the plane with a Guide dog! The pilot was even wearing sunglasses. People scattered. They not only tried to change planes, but they were trying to change airlines!


True story... Have a great day and remember... 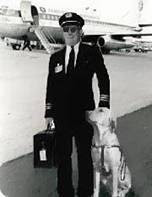 ..THINGS AREN'T ALWAYS AS THEY APPEAR.
A DAY WITHOUT LAUGHTER IS A DAY WASTED!!!

May 03, 2010
The May 2010 Euthanasia Prevention Coalition Newsletter can now be found at: http://www.euthanasiaprevention.on.ca/Newsletters/Newsletter108(May2010)(RGB).pdf Bill C-384 was soundly defeated by a vote of 228 to 59. Check how the Members of Parliament voted at: http://www.euthanasiaprevention.on.ca/HowTheyVoted.pdf On June 5, 2010, we are co-hosting the US/Canda Push-Back Seminar at the Radisson Gateway Hotel at the Seattle/Tacoma Airport. The overwhelming defeat of Bill C-384 proved that we can Push-Back the euthanasia lobby in the US and Canada and convince people that euthanasia and assisted suicide are a dangerous public policy. Register for the Seminar at: http://www.euthanasiaprevention.on.ca/2010SeminarFlyer(RGB)(LetterFormat).pdf The Schindler family are being attacked by a Florida television station and Michael Schiavo. The Euthanasia Prevention Coalition is standing in solidarity with the Schindler family. My blog comments: http://alexschadenberg.blogspot.com/2010/05/att
17 comments
Read more
June 19, 2010
2 comments
Read more