What have the Olympics revealed about God & Country! 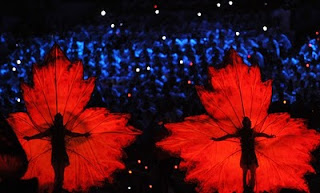 The goosebumps have hardly left my arms as I write this post in the wake of the triumph of our hockey team over Team USA; the athletic finale to the Vancouver Olympics, which have been the single greatest standard of excellence in setting an all time Winter Olympic high for gold medals won by a single country! My sense of patriotism and pride in the Canadian accomplishments these past 17 days, has brought me to my feet several times in singing our national anthem. For the "first time ever won on our home soil" gold of Alexandre Biladeau, to the final gold of the hockey victory I suspect that there have been few equals in the outpouring of national pride  now being demonstrated up in these hours!

Believe me, I give thanks and praise to God for these victories!!

Yet, I can predict there are in both the theist and atheist camps, those who would object to my confidence in saying that God is responsible for this explosion of patriotic fever, which grips all Canadian citizens from Kandahar, Afghanistan to the furthest corners of the globe. Either God does not exist, or He does not concern himself with such concerns... but I ask you to consider this.

Every other image, ritual and moment of media coverage has been an expression of paganism (as reflected in the depictions of the faiths of the first nations), or explicitly commercial in nature. The name of God has hardly if at all been heard in the coverage or either of the opening and closing ceremonies, save for the hearty and full throated acclamation of   God in a request for his protection and blessings in its concluding stanza's of the Canadian national anthem - offered from the lips of citizens, athletes and the not so svelte types like me. * In the midst of an entirely secular/pantheistic broadcast, he makes his name known to the farthest extremes of the earth (and beyond in the International Space Station with its Canadarm - another source of immense national pride). 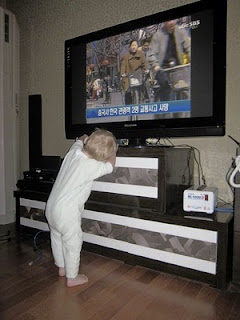 (Every notice that kids who can set up these new fancy T.V. sets for 'Gramps" to watch the big game seem to be getting younger every year! The Chinese script doesn't seem to faze them a bit!)
That Canada is blessed as a nation is undeniable... no matter how hard the MSM and Olympic organizers work to keep us from knowing it! The name of God rings loud and often these days in Canada. As a Canadian Catholic, it is an exceptionally wonderful feeling to experience, for I believe in the power of the name of God. His name stands in countenance to those of the forces which adore powers other than those of the Christian God (or no God or all) who have tried so hard to stamp out of the public square.

Canada is the best and most faithful friend that America will ever have; their single greatest source of imported energy and the largest source of fresh water in the world. In every serious world conflict that follow our assumption of full sovereignty in striking an independent foreign policy from that of Great Britain, the blood of Canadians has mingled with that of Americans in World War I & II, Korea, and first Gulf War. From the ethnic conflicts of the Balkans and Africa - to Afghanistan and other covert actions in the war on terror, whenever asked, Canada has done its part. Our relationship is not one of neighbors. We're family.

Pride in country is in no way an insult to either of our two nations both on and off the ice!

It was a terrific Olympics with all the essential trophies (Most overall medals - USA; Most EVER Gold medals at one winter Olympic - Canada) residing for at least the next four years on our continent.

Now if Mexico can win the World Cup, it would be the perfect continental trifecta! 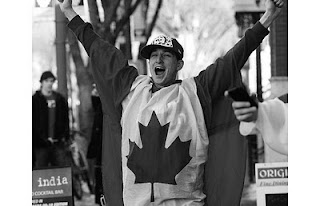