George Weigel: “The Catholic Church in the United States is the safest environment for children in the country. Period.” - Caught your attention, eh? 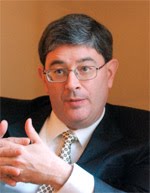 “The Catholic Church in the United States is the safest environment for children in the country. Period.”
So says George Weigel, theologian, historian, biographer of Pope John Paul II and media commentator representing what is perceived as being the 'orthodox' voice of today's Roman Catholic Church. Weigel has never been accused of dodging the difficult question facing the Roman Catholic in these challenging times and he didn't disappoint when he recently agreed to share his thoughts on some of the challenges facing contemporary Catholic values and practice.
(Note from Fr. Tim: In the interest of transparency, let me state up front that I've been privileged to share a friendship that stretches back over 20 years with George. We've spent many a summers evening together on the Quebec side of the Ottawa Valley, usually in the company of our mutual friend, Fr. Richard John Neuhaus, (R.I.P). While those conversations maintain the privacy that friends share with each other, his answers today were very much 'on the record'. I thank him for this kindness.)
---------------

TM: In 'Faith, Reason, and the War Against Jihadism', you expressed concern about the dangers of a rising tide of militant Islamism spreading throughout Christian Europe. This concern was expressed both in terms of the respective demographic trends, (Christians declining/Muslims ascending) and in terms of Islamist terrorist attacks from groups like al Qaeda. While it seems that the experiences in western Europe evidences to the truth of these phenomena, do you think that North American societies are going to face the same tension and crises in the near future?
GW: Not in the same way, because the demographics are quite different, Still, the radicalization of elements of the Muslim population in the greater Montreal area, which has led to ugly incidents of anti-Semitism, is surely a cause for worry. So is the political correctness that precludes discussion of these problems, and similar ones in the United States.
TM: What's so different about the demographics here than in Europe? North America seems to follow most European trends. In Canada we see this happening first in Quebec and then eventually spreading through the rest of the country. Are our falling birthrates here not indicative that this same trend has taken root here from across the Atlantic?
GW: “Canada is Europe transplanted, demographically; the U.S. isn't. We have an above-replacement level birth rate and our immigrants are from the same civilizational orbit. The Muslims shouting anti-Semiic slogans in Montreal are not from the same civilizational orbit, and the failure to recognize that (and help them assimilate to the way we do things in an open society) is a function of a lot of p.c. nonsense. We've got what might be termed a parallel problem with some Hispanic immigrants, but the civilizational "gap" isn't as great.”
Posted by Fr. Tim Moyle at 10:00 AM