In response to todays Gallup Poll, I offer this re-working of one of the foundational posts of this blog - "Je me souviens"

Working as I do within the beauty of the Ottawa Valley, I see many cars pass by from “la belle province” emblazoned with the motto “je me souviens” imprinted on each licence plate. These words is a declaration of the desire of the majority francophone people to  “remember” the struggles of “la révolution tranquille” (the Quiet Revolution) ; an epoch which transformed Quebec society into the modern secular state, within whom the francophone population, seemingly all at once, have turned a deaf ear to the voice of the Catholic Church within their culture. They've chosen instead to follow the siren cry of the modern secularist project. In the wake this sudden shift, the Catholic Church was  rendered  impotent and irrelevant in the minds of the overwhelming majority of the Quebec population. Within the few years of the Quiet Revolution, virtually 400 years of Catholic practice had vanished.

The most graphic illustration of this variation can be seen in statistics re: church attendance (from the high 80% or more in 1960 to approximately 5%-10% today). The Quebec society is also more advanced in implementing the modern secular agenda: legalization of same-sex marriages, abortions, and the stripping of religion from the public.

The parallel to the situation within the English Canadian Catholic Church of today is eerily similar to the situation of Quebec in the 60’s, although at first blush one might have trouble seeing in the connection. Then it was young academics and labour leaders such as Pierre Trudeau and Jean Marchand, educated in church run colleges, who led the charge towards the “modernization” of the French project within Quebec. Having drunk deeply from the chalice of philosophy, reason and justice that they studied in catholic schools, they stepped forward as leaders who were seduced by a misapplication of the teachings of Rev. John Courtney Murray in his differentiation of the spheres of church and civic compete nce (see recent writings of G.S. Weigel on the subject). Perhaps like any parent who sees their child begin to make a name for themselves the Bishops, religious and clergy of Quebec sat back in silence because they were blinded with a nationalist pride as they saw this new generation establish a genuine francophone body of leaders who would ensure the survival of the “French fact”. This had been a responsibility that the Church had carried since the days of the English Conquest on the Plains of Abraham.  Alas, these children did not share in the values of their “spiritual” parents.

With an amazing rapidity, the church found its ignored in the secular debates of the day; debates which has led the majority of Québecois to abandon the moral authority of the church. This patricide inflicted upon the Bishops doomed the church to being relegated to the sidelines for the foreseeable future as the liberal, secular humanist project continues apace.

This same process is happening again, only this time it is not a societal debate about the virtues of secularism or the role of Catholic institutions. Nor is it an expression of a collective pent up anger in the face of centuries of clericalism. Rather, the moral suasion of the church is being rapidly eroded by the litany of sex abuse scandals that beset the Catholic Church and the hierarchies continuing failure to effectively confront this evil. The unwillingness of our religious leaders to forcefully and actively engage in the societal debates which have erupted in the wake of this crisis dooms us to repeat the failures of Quebec. Surely this cannot be the path that God intends for his Church and the faithful.

There have been exceptions. Archbishop Anthony Mancini (Halifax) addressed this issue forcefully with an emotionally charged letter to Catholics in his Diocese in the wake of the 2009 Bishop Raymond Lahey pornography scandal. Other have used the levers of public discourse afforded them within both new and traditional media forums to provide a Catholic voice on crucial debates   of the day. When called upon, Archbishop Tom Collins (Toronto) and Bishop Fred Henry (Calgary) have both used the media to superb effect to teach and preach an authentic Catholic message. Sadly though, these examples seem to be few and far between within our national Episcopacy. Too often commentary is  offered in the language theological statements  issued by the Canadian Conference of Catholic Bishop (CCCB), which functions (in theory,) as the Bishops’ collective voice. It is virtually incomprehensible to the majority of today's Canadian Catholic who lack the doctrinal formation and catechisis needed understand these episcopal pronouncements.

Seemingly afraid to stand out from amongst their brother bishops, many have rendered themselves impotent in guiding the faithful through these difficult waters by simply refusing to speak.

The Bishops of English speaking Canada should heed the lessons of "la révolution tranquille" lest “je me souviens” become the lament of  today's Canadian Catholic Church. It is time for each of them, to preach and teach as they are called to do by virtue of their ordination, and engage in the questions of the day. Individually and collectively, using every lever at their disposal, and using the language and instruments of social communications offered them today they must present the argument for the faith, before it is too late. May they will heed the lessons learned from the silence of their French confreres 40 years ago, and not repeat that same mistake again. 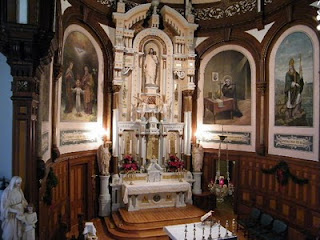